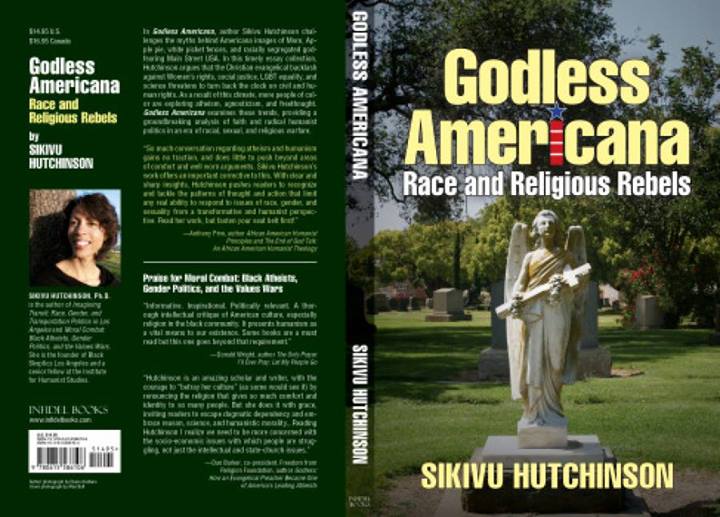 “Godless Americana” is an eye-opening passionate critique of the current socioeconomic struggle faced by people of color. It also exposes the role white Christian nationalism has in vilifying urban communities. It’s a quest for how Humanism can be relevant to such communities. You may not agree with everything Dr. Hutchinson has to offer but we can no longer afford to be uninformed of the circumstances that have negatively and unfairly defined people of color. This revealing and at times uncomfortable 234-page book is composed of the following seven chapters: 1. American Terror, 2. God’s Body, Science’s Brain, 3. Straight to Hell: Christian Fascism and Americana, 4. White Picket Fences, White Innocence, 5. Prayer Warriors and Freethinkers, 6. Seeing Things, and 7. Ungrateful Dead.

Positives:
1. Well researched, and ardent prose. Dr. Hutchinson has a way with words.
2. Fascinating topic in the hands of a keen observer.
3. Dr. Hutchinson brings it! This is a book of social criticism backed by substantive arguments.
4. Discusses her important role of empowering young women with tools to become critical observers of society.
5. Mentions many books and makes many interesting pop-culture references.
6. Understanding white privilege. “But white privilege means never having to be in an environment in which whites are the racial others, and secularism means more than freedom from religion. It means never having to be conscious that the black and brown hotel “help” outnumber the paying participants of color at plush academic conferences.”
7. Fair and even-handed treatment of religious organizations. “In some instances, faith communities have been far more proactive in creating safe cultural and social spaces for LGBT people of color.” Does a wonderful job of explaining why faith-based organizations are so invested in communities of color.
8. Thought-provoking questions made throughout the book. Many times I found myself more intrigued by the questions than the answers. “If heaven is such a paradise, a land of milk, honey, and godly blessings, why defer the everlasting?”
9. Race relations discussed. “Women of color have never had the luxury of looking down on white women from pedestals or plantation houses.” Uncomfortably enlightening. ”
10. The paradox for African American non-believers. Fascinating stuff!
11. Politics and race. “Much of GOP presidential primary messaging about work–from Newt Gingrich’s racist slurs about blacks waiting for food stamps, to Rick Santorum’s “I don’t want to make black people’s lives better by giving them other people’s money” comment–evoked the myth of black welfare dependency and white industriousness.”
12. Science and race. “Graves (the first African American to have earned a Ph.D. in evolutionary biology) is in an elite group of internationally-renowned African American scientists who have struggled with entrenched institutional racism in academia.” Also debunks some myths.