Shadow of the Plantation: Statement in Solidarity with Abortion Freedom Rides 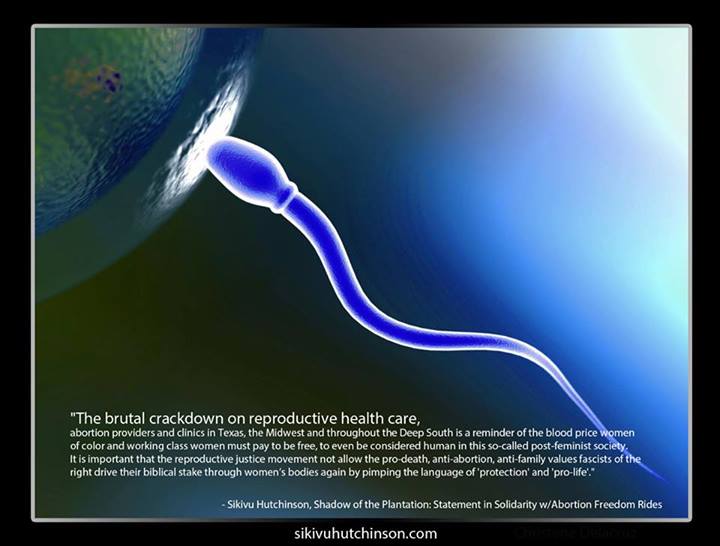 The Stop Patriarchy coalition’s Abortion Freedom Rides begin July 23rd
In her book In Search of Our Mother’s Gardens, Alice Walker writes, “What did it mean for a black woman to be an artist in our grandmother’s time? Our great-grandmothers’ day? Did you have a genius of a great-great-grandmother who died under some ignorant and depraved white overseer’s lash? Or was her body broken and forced to bear children (who were more often than not sold away from her)—eight, ten, fifteen, twenty children—when her one joy was the thought of modeling heroic figures of rebellion?”

Some of us are here because our foremothers were enslaved, raped and forced to bear children they didn’t want. Some of us are here because our foremothers did everything possible to salvage their lives and self-dignity with alternative medicine and often dangerous aborting devices.  In a culture in which women of color are expected to sacrifice, total self-determination has always been a revolutionary act. The current climate of Christian fascist anti-abortion terrorism is a mortal threat to communities of color and all working class people nationwide. It is an affront to the valiant activism of scores of anonymous women who died in back alleys from “illegal” abortions rather than be shackled to the dehumanizing gender hierarchies of the state, patriarchy and the church. The brutal crackdown on reproductive health care, abortion providers and clinics in Texas, the Midwest and throughout the Deep South is a reminder of the blood price women of color and working class women must pay to be free, to even be considered human in this so-called post-feminist society.  It is important that the reproductive justice movement not allow the pro-death, anti-abortion, anti-family values fascists of the right drive their biblical stake through women’s bodies again by pimping the language of “protection” and “pro-life”.  Over the past few years Christian fascists have labored fiercely to create conditions in which universal health care is deemed to be anti-American and Black and Latina women are criminalized as “dangerous” wombs; mere breeders with no basic human rights.  Outlandishly, they have gone so far as to compare fetuses to slaves, and, by implication, women of color to slave owners, stamping the “Scarlet I” of immorality on our bodies.  These rich white male guardians of death are in league with a regime which is the most prolific jailer and executioner of Black people in the capitalist world.  They care nothing about the scores of children of color in foster care, on the streets, and in prisons.  For them, children of color are only useful as political pawns in the anti-welfare state public policy and propaganda war; demonized as collateral damage, welfare queens, savages, and criminals a la Trayvon Martin, a beautiful Black boy lynched twice by the criminal justice system.  In Texas, disproportionate numbers of Latinas rely on Medicaid, which is under attack by the Perry administration.  And in Mississippi, disproportionate numbers of poor and working class African American women rely on the imperiled family planning clinic that currently hangs by a legal thread.
Decades after the end of Jim Crow, white people have over twenty times the wealth of Blacks and Latinos and the myth of the accessible American dream has turned into even more of a nightmare for people of color besotted with the delusion of democracy. The assault on women’s abortion rights is yet another assault on economic and social justice and a betrayal of the foremothers who sacrificed so we would never know the shadow of the plantation.
The Abortion Freedom Rides kick off July 23rd in New York and San Francisco and end August 17th with a Day of Action in Jackson, Mississippi. For more information contact, Stop Patriarchy coalition, stoppatriarchy@gmail.com.
PrevPreviousIlda B. Wells, Feminist Public Menace
NextSikivu Hutchinson Featured in Salon, by Soraya ChemalyNext