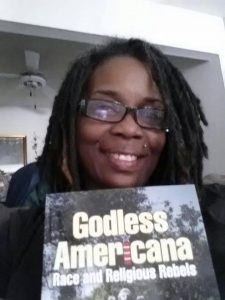 “Sikivu punches in the gut”.

“Godless Americana is a thoughtful and beautifully written book”

Sikivu’s Americana will have you musing at the space contemporary cultural characters like Honey Boo Boo occupy and in the next breathe, have you ponder the true intentions and operative strategies of political heavy weights such as Newt Gingrich.

Godless Americana is a thoughtful and beautifully written book on the broader cultural climate people of color live in. It is also, at the same time, the lens from which people of color see through. This book is the articulation of complicated daily negotiations and all too common clashes/ indignities people of color are subject to as citizens that are pathologized and marginalized by a dominate culture. Sikivu’s book premieres on the heels of a sixteen year-old African-American girl who has been charged with two felonies for conducting science experiments where no one was hurt and no property damage occurred.

In this follow-up to her excellent book Moral Combat, Sikivu Hutchinson leaves no political stone unturned and no sacred cow unscathed. From the white nationalist shenanigans of the Religious Right to the delusion of American exceptionalism and neo-liberal assaults on public education, Hutchinson gives us a bracing and provocative vision of humanism that puts the half-baked “We are the World-isms” of most humanist books to shame. I was especially intrigued by her dissection of “mainstream” (yes we can call it that now) atheist movement gyrations about diversity and colorblindness. She has a whole chapter that blasts the white atheist love affair with the ideal of infallible science—an ideal that is conveniently shorn of Western science’s colonialist history and present. She also zeroes in on the shameful lack of science literacy and opportunity provided youth of color in our public school systems, and condemns the way these youth are criminalized and shut out of the college prep curriculum many white students take for granted. Other chapters focus on the appalling racial wealth gap and its implications for the upward mobility of people of color in a so-called post-racial nation. None of the major atheist books I’ve read seem to notice or care that this factor drives the dominance of faith institutions in inner city communities that have been ravaged by the decline of manufacturing. By taking on the sacred ideal of American “everybody in the world wants to be like us” exceptionalism from an atheist perspective, “Godless” is a groundbreaking commentary on racial injustice and economic inequality.

“I implore you to purchase them..”

Godless Americana is definitely a MUST READ!

Dr. Hutchinson expertly dissects the dismantling of the American public education system, the school to prison piepline, and the failure of charter schools. Dr. Hutchinson’s Women’s Leadership Project (WLP) is a fine example of feminist civic engagement and mentoring that was typically not afforded to young women of color.

American fascism, exceptionalism and xenophobia is challenged directly with no apologies. While many shirk from addressing these issues, Dr. Hutchinson relentlessly gives us examples of the impact of these institutionalized policies that have been put in place. She gives hard facts about how the Federal Housing Authority (FHA), GI Bill, and Public Policy directly affected people of color to create and perpetuate our current wealth gap.

Dr. Hutchinson’s and Black Skeptics Los Angeles dedication to youth of color is admirable. The “First in the Family” scholarship for undocumented, LGBTQ, homeless, and foster care youth is geared toward students of under served and underrepresented students. The motivation behind this scholarship program is discussed in detail.

Godless Americana directly complements “Moral Combat,” Dr. Hutchinson’s other brilliantly written book discussing black atheists and gender politics. They are both truly ‘must reads’ and I implore you to purchase them.

“I deeply believe her book presents a challenge to non believers to fight for their right to hold and spread their spiritual disbeliefs, practice secular humanism, and engage and challenge the hypocrisy of many in the religious community.”

Sikivu Hutchinson has written a tour de force in Godless Americana. I say this from the point of view of a Christian evangelical and a devout believer. Yet, despite my fervent belief in God and New Testament Biblical prescriptions, I deeply believe her book presents a challenge to non believers to fight for their right to hold and spread their spiritual disbeliefs, practice secular humanism, and engage and challenge the hypocrisy of many in the religious community.

Engaging believers and non-believers on what is the true essence, meaning and practice of religion–both belief and non-belief– is much needed, and long overdue. Godless Americana is the spur for that engagement. Agree, or disagree, smile or become infuriated at her position, as always Sikivu Hutchinson profoundly challenges us to think hard about the place of religion–for good and bad–in our lives.

“Sikivu has done it again. Read it.”

Sikivu Hutchinson has done it again. In her latest book, she employs her ruthless analytical skills to expose the underbelly of “Americana,” particularly as this myth is perpetuated by the religious right to the detriment of people of color, women and other marginalized folk. In so doing, she offers a radically different take on reality–historical and contemporary–from a secular, humanist and unapologetically African American perspective. It’s important to note that Hutchinson supports her assertions with hard facts. This book is not, unlike so many, a tiresome exercise in self indulgent or lazy theorizing. Hutchinson’s discussion of the contemporary crisis in education in black and brown communities, including the frightening charter school movement, is one of the many reasons “Godless” is a must read. Provocative and engaging from start to finish. Read it.

“Sikivu Hutchinson’s latest critical assault on unreason, intolerance, ignorance, and injustice in America is just as viscerally hard-hitting and intellectually satisfying as her 2011 effort”

Sikivu Hutchinson’s latest critical assault on unreason, intolerance, ignorance, and injustice in America is just as viscerally hard-hitting and intellectually satisfying as her 2011 effort, “Moral Combat”. “Godless Americana” picks up where “Moral Combat” leaves off, shifting the analytic focus from Black Christian culture to White Christian, but maintaining the theme of the necessity of grass-roots culturally relevant humanism to effect social change in America. Dr Hutchinson’s superb research once again embellishes her critiques of the institutionalized racial, sexual, and religious mythologies that have stymied cultural and social progress in this country since before its’ founding. Anyone claiming to be human in America needs to read her work….and act on it.