Fighting for 15, the Equality Act, and Black Queer Families 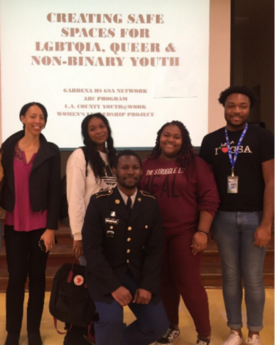 As the Religious Right doubles down on its fascist grip on Midwestern and Southern state legislatures, the House recently passed the Equality Act, which grants historic protections to LGBTQI+ communities in the workplace, public accommodations, and public education. The Act now moves to the Senate, where it faces stiff opposition from GOP “Christian family values” bigots. The House’s support comes at a critical juncture in the pandemic, coinciding with the Democrats’ efforts to pass the Covid relief bill, increase the federal minimum wage (derailed by “Senate parliamentarian rules” bureaucracy and Democrats’ gutlessness), and institute a “child allowance”. While passage of the Equality Act would be an economic justice watershed for LGBT communities overall, the Act, along with these pieces of legislation, could significantly boost African American queer families.

Nationwide, Black LGBT families are more likely to be at or below the poverty line than non-LGBT Black families, with poverty rates of 30.8% to 25% respectively. According to the Human Rights Campaign and the National Black Justice Institute, a majority of Black youth have been subjected to homophobic climates in their schools, families, and neighborhoods. Hence, the Equality Act would be a sea change for LGBTQ+ communities long disenfranchised by everyday religious bigotry, homophobia, poverty wages in the workplace, and exclusion in public schools.

The Equality Act “would amend the 1964 Civil Rights Act to explicitly prevent discrimination based on sexual orientation and gender identity.” It effectively buttresses the Supreme Court’s 2020 ruling extending anti-discrimination protections to lesbian, gay, and transgender Americans. Gender identity and sexual orientation would become federally protected class categories (as race and gender are currently), affording LGBT folks legal rights to employment, schooling, and housing regardless of what state they live in. Federal expansion of civil rights to queer communities is critically important because many states in the Bible Belt and Midwest do not have laws explicitly protecting LGBT workers and families.

The legislation has elicited the usual backlash from conservative religious groups due to the threat it poses to the Religious Freedom Restoration Act or RFRA. The RFRA essentially gives religious groups carte blanche to discriminate against LGBT folks under the guise of protecting “religious freedom”. According to NPR, “Under the Equality Act, an entity couldn’t use RFRA to challenge the act’s provisions, nor could it use RFRA as a defense to a claim made under the act.” By taking away the legal foundation of so-called religious freedom claims, the Equality Act would reinforce church-state separation and curtail religious fundamentalists’ federally sanctioned license to discriminate.

Legal barriers to LGBT equity are undergirded by disproportionate poverty levels among queer families of color. The Williams Institute estimates that Black LGBT couples earn less than non-LGBT couples, while Black female-headed same-sex households earn approximately $20,000 less than Black male same-sex households. African American lesbians in particular are more likely to be raising children while being segregated into low-wage jobs with few benefits and nominal workplace protections. It is projected that the child allowance would cut child poverty in half, with African American and Indigenous families reaping the greatest benefits. According to the Economic Policy Institute, over thirty percent of Black workers would get a raise if the federal minimum wage increases. LGBT families of color would directly benefit because many Black, Latinx, Asian, and Indigenous queer, trans, and gender-nonconforming rank and file workers are employed in low-wage service and food sector jobs.

Nationwide, people of color in general, and Black youth in particular, are more likely to identify as queer, a fact still obscured by cultural representation that privileges white queer lives and childless white gay men. These major demographic shifts away from Black hetero-norms are rarely addressed in Black liberal economic justice discourse. And, truth be told, even the most “progressive” straight Black pundits assume straight/cis single or two parent households when condemning institutionally racist family policies. The new safety net provisions can help create and preserve multigenerational wealth among Black queer families doubly marginalized by white supremacy on the one hand, and Black heterosexism on the other. In the final analysis, intersectional coalitions that actively fight for Black queer familyhood as a cornerstone of Black communities will be essential to true Black self-determination.