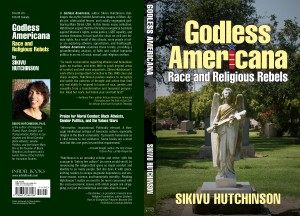 Abuse of privilege and power plagues the nontheistic community just as much, in some ways moreso, as it does American society. Sikivu Hutchinson has emerged as a strong, incredibly thorough academic pushing back against these oppressive structures, tracing the history of Black humanism and liberation, and investigating the religious dimension of oppression towards women of color.

In terms of movement strategy and critical humanism, Hutchinson has exposed and explored several ways in which the contemporary face of secularism is shortsighted–particularly with regard to intersectionality and privilege. In a piece I wrote for HuffPo a few months back on class and the new atheist/humanist movement, I quoted Hutchinson from her essay “Prayer Warriors and Freethinkers”, expressing a truth still (perhaps especially) relevant today: “If mainstream freethought and humanism continue to reflect the narrow cultural interests of white elites who have disposable income to go to conferences then the secular movement is destined to remain marginal and insular.”

In the striking passage below from the introduction to her newest essay collection Godless Americana: Race and Religious Rebels, published by Infidel Books, Hutchinson embarks on a critical exploration into how humanism can be applied to a world marred by structural racial inequality and colorism. You can purchase Godless Americana at Amazon.com.

Over the past several years, the Right has spun the fantasy of colorblind, post-racial, post-feminist American exceptionalism.  This Orwellian narrative anchors the most blistering conservative assault on secularism, civil rights, and public education in the post-Vietnam War era.  It is no accident that this assault has occurred in an era in which whites have over twenty times the wealth of African Americans.[i]  For many communities of color, victimized by a rabidly Religious Right, neo-liberal agenda, the American dream has never been more of a nightmare than it is now.  Godless Americana is a radical humanist analysis of this climate.  It provides a vision of secular social justice that challenges Eurocentric traditions of race, gender, and class-neutral secularism.  For a small but growing number of non-believers of color, humanism and secularism are inextricably linked to the broader struggle against white supremacy, patriarchy, heterosexism, capitalism, economic injustice, and global imperialism.  Godless Americana critiques these titanic rifts and the role white Christian nationalism plays in the demonization of urban communities of color…

In the post-Civil and Voting Rights Acts era of so-called equal opportunity under the law, residential segregation has only intensified.  Martin Luther King Jr.’s widely caricatured vision of little black and white kids holding hands is the stuff of Hallmark cards, PC liberal arts college brochures, and smarmy GOP propaganda.  American K-12 schools are distant galaxies separated by inner city (i.e., black, Latino and “deprived”) or suburban (i.e., white and privileged), and “diversity” has become quick and dirty shorthand for smacking down uppity Negroes who want to talk institutional racism. It’s for this reason that the social capital of black believers and non-believers is closely intertwined—why black people, the most staunchly Christian group in America, can live in a Christian Nation and still be reviled as the heathen other. And it is for this reason that religious and secular whites are bonded by economic privilege, by homes and neighborhoods that have higher property values than that of the average person of color, and by the security of a police state that is designed to protect them.  For example, discriminatory lending practices such as those employed by former mortgage giant Countrywide make residential mobility elusive for people of color. Despite the fantasy of unlimited post-racial access and mobility, a U.S. 2010 report entitled “Separate and Unequal: The Neighborhood Gap for Blacks, Hispanics, and Asians” concluded that residential segregation is even more intractable now than two decades ago. Indeed “as black-white segregation has slowly declined since 1990, blacks have become less isolated from Hispanics and Asians, but their exposure to whites has hardly changed. Affluent blacks have only marginally higher contact with whites than do poor blacks.”[ii] Hence, blacks and Latinos of all income levels generally live in black and Latino neighborhoods. Most tellingly, “The average affluent black or Hispanic household lives in a poorer neighborhood than the average low-income white resident.”[iii]

If higher-income people of color are not able to buy homes in white enclaves and escape the “ghetto,” what does this say about the nature of black and Latino social capital? About the white conservative lie that Newt Gingrich’s mythical poor neighborhoods are cesspits for the lazy and shiftless? Because of the mobility gap, communities of color are more likely to be economically depressed and heavily transit-dependent. Transit-dependency means isolation. It means less access to living-wage jobs, quality schools, affordable housing, and park space—resources that have been deemed privileges, not rights, in the world’s greatest democracy. Small wonder then that some of our youth, like Women’s Leadership Project twelfth-grader Victory Yates, view their churches as a lifeline. Even though her faith in God has wavered due to the hardship she’s experienced as a former foster care youth, her church is one of the few safe spaces in a neighborhood where young girls are routinely accosted by would-be pimps on the street. In our conversations about faith, she expresses curiosity about agnosticism and frustration with the so-called therapeutic power of prayer. Naturally inquisitive, she’s begun to make the first tentative steps toward investigating the truth claims of religion.

In the absence of community-based institutions that offer cultural reinforcement, social welfare, and fellowship, what does humanism have to offer poor and working-class communities of color?

Sikivu Hutchinson is the author of Imagining Transit: Race, Gender, and Transportation Politics in Los Angeles and Moral Combat: Black Atheists, Gender Politics, and the Values Wars. She is the founder of Black Skeptics in Los Angeles and a senior fellow at the Institute for Humanist Studies. Learn more on her website at sikivuhutchinson.com.